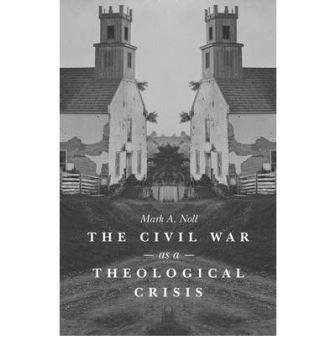 6:08 PM Today I started reading a wonderful little book called The Civil War as a Theological Crisis by Mark Noll, who is perhaps the doyen of American history among evangelicals today. It is masterfully written and brilliantly argued.

Noll tries to show how mid-19th century American Christians (both North and South) generally agreed that the Bible was authoritative but they differed on how that Bible should be understood. Not only this, but he shows how “the Book that made the nation was destroying the nation; the nation that had taken to the Book was rescued not by the Book but by the force of arms” (p. 8). He is so right about this! Indeed, how apropos to today’s political climate in the United States. Biblical interpretation in America today, even biblical interpretation by conservative evangelicals, has perhaps never been so divided and chaotic. Just as the American Civil War generated a first-order theological crisis over how to interpret the Bible, so this year’s presidential election is generating a first-order theological crisis over how to understand the work of God in our nation. The church of today has to a large degree become more or less subject to the controlling influence of public opinion rather than shapers of public opinion. The parallels with the 1860s are obvious. “Had white protestants been following the Bible as carefully as they claimed, they could not have so casually dismissed the biblical interpretations advanced by Pendleton and Fee and mentioned by Lincoln. The inability to propose a biblical scheme of slavery that would take in all races reveals that factors others than simple fidelity to Scripture were exerting great influence as well” (p. 56). I suspect that many Christians reading Noll’s book would be nodding their heads in agreement. I’m finding this book a compelling demonstration of this truth. That’s why today you will find leading evangelicals both defending Donald Trump and excoriating him, with both sides using the Bible to defend their actions. For my two cents, I cannot understand how anyone can defend Trump’s candidacy. Yet I want to end by saying that this doesn’t mean that I or anyone else has the right to condemn those who support Trump based on their own interpretation of “forgiveness,” “the God of a second chance,” “the sanctity of life,” etc. I thus have no right to judge my Christian brother or sister in these matters. But neither can I with integrity claim to understand how they can reconcile their views with the teachings of the New Testament. All of this suggests, I believe, that each of us has to wrestle with how to reconcile the facts of this year’s political cycle with the Scriptures. Above all, I hope we can all remember that we do not fight as the world fights — that is, by hatred and violence (2 Cor. 10:3-4). Instead, we are called to fight this battle by displaying God’s love to all people, including those with whom we might strongly disagree politically. My point is not that we shouldn’t have strong convictions about whether so-and-so is qualified to be president of the United States. My point rather is that we need to constantly distinguish between the kingdom of our Lord and of His Christ, and the kingdom of this world. And to do this, we must be more about giving other people Jesus Christ  — not rules, not entertainment, not partisan rhetoric. I have no confidence in the political system but I have every confidence in Jesus.

I encourage us all to keep the Gospel first. It really is a big deal!